A gleaming gold coin with Lady Liberty on one side and a soaring eagle on the other. Reed, our coin expert, knew there was something special about this piece when he first spotted it while sorting through a bag of mixed coins that had recently come in from one of our police department clients. It had a sharply defined, high relief design, and its lettering said it was worth $20, but Reed had a suspicion it might be worth much more and sent it off for appraisal and authentication.

Turns out PropertyRoom had received a tiny piece of American history: During the early 1900s, inspired by the ancient Greek coinage he had seen while touring the Smithsonian Institute, Theodore Roosevelt called upon an Irish-born sculptor, Augustus Saint-Gaudens, to produce a new series of coins that would reflect America’s greatness. Saint-Gaudens created a work of art that would be admired through the ages: the Saint-Gaudens Gold $20 Double Eagle – widely considered to be the most beautiful coin ever minted in the United States.

One of Saint-Gaudens’ greatest artistic accomplishments, the Saint-Gaudens Gold $20 Double Eagle is not without controversy: By the end of 1907, Charles Barber, Chief Engraver of the U.S. Mint from 1879 to 1917, who was jealous of an outside artist having a hand in coinage, had completely changed the double eagle hub, and as a result all issues other than the High Relief differ significantly from the artist’s original intention. Because of this, only 12,367 coins were ever minted with Saint Gaudens’ original design and it remains, to this day, one of the most highly sought after collectible coins in the world.

What was the winning bid for this piece of American history? $27,025. That’s hardly loose change! 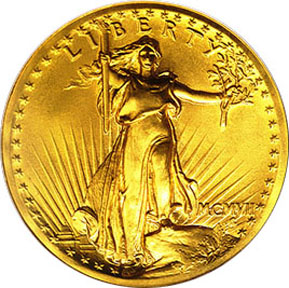