We anticipate it yearly – kids especially. All excited to put on some costumes and roam around the village to gather some treats. It is one of the oldest holidays still celebrated today and one of the most popular holidays as well, second only to Christmas. Some people view Halloween as a time for fun – putting on costumes, trick-or-treating, and having theme parties. Others view it as a time of superstitions, ghosts, goblins and evil spirits that should be avoided at all costs. But did you really know how Halloween came about?

Halloween or All Hallows Eve, as it is sometimes referred to, is a lot different now than it may have been celebrated many centuries ago. The earliest trace of Halloween is the Celtic festival, Samhain (pronounced sah-win or sow-in) means “summer’s end” by the Celts. It was the day of the dead, and they believed the souls of the deceased would be available. 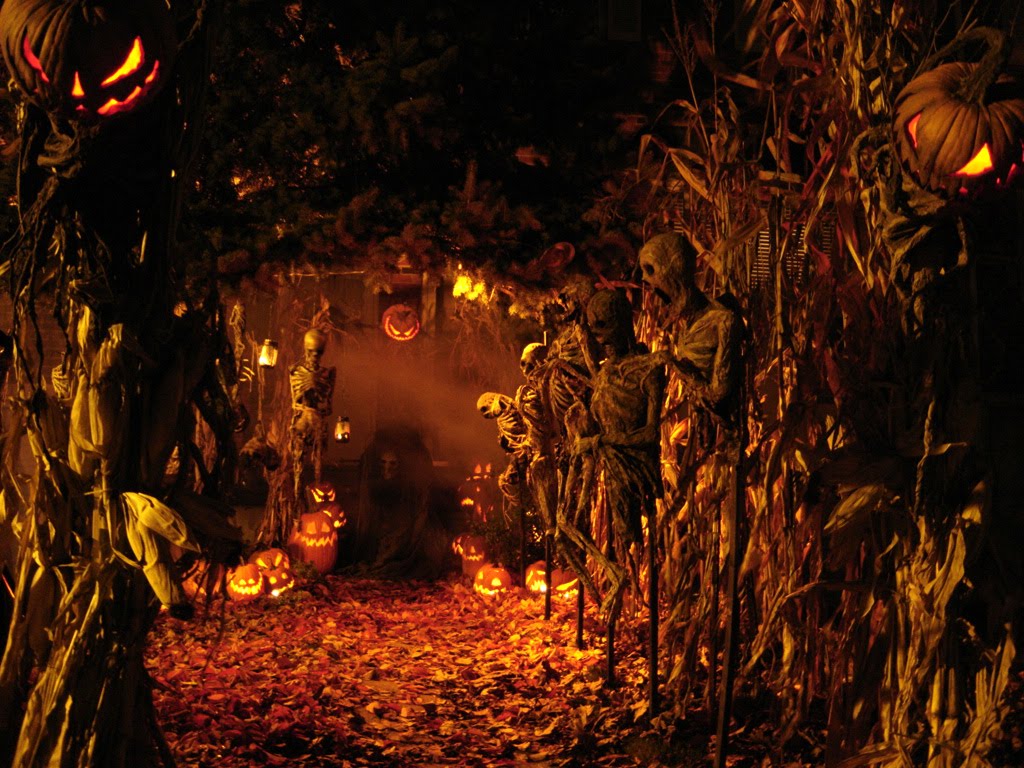 Summer’s end which meant the beginning of winter was an important time for people who survived on plants grown in the field and animals that were kept in pastures. This day marked the end of summer and the harvest and the beginning of the dark, cold winter, a time of year that was often associated with human death.

The Druids, or priests, celebrated this holiday with a great fire festival to encourage the dimming sun not to vanish and people danced around bonfires to keep evil spirits away, but left their doors open in hopes that the kind spirits of loved ones might join them. Also during the celebration, the Celts wore costumes – typically consisting of animal heads – to avoid being possessed by the spirits roaming around. As they believed these spirits are entertained by the living or are finding a body to possess for the incoming year – this is the origin of dressing up like witches, ghosts and goblins.

Halloween came to the United States when European immigrants brought varied Halloween customs. In the second half of the nineteenth century, America was flooded with new immigrants including the Irish fleeing from the potato famine in Ireland in 1846. By combining Irish and English traditions, Americans began the “trick-or-treat” tradition. In the later 1800s, the holiday became more centered on community and in the 1920s and 1930s, Halloween became a secular, but community-centered holiday. In the 1950s leaders changed Halloween as a holiday aimed at the young to limit vandalism. This all led to what Halloween we know today.

Now that we’re at it, let’s dive deeper and take a look at most of the Halloween traditions and superstitions.

Witches have had a long history with Halloween. Legends tell of witches gathering twice a year when the seasons changed, on April 30, the eve of May Day, and the other was on the eve of October 31, All Hallows Eve. It was said that the witches would gather on these nights, arriving on broomsticks, to celebrate a party hosted by the devil. Superstitions told of witches casting spells on unsuspecting people, transform themselves into different forms and causing other magical mischief.

This is one of the beliefs that were brought by early settlers when they came to America. The legends of witches spread and mixed with the beliefs of others, the Native Americans – who also believed in witches, and then later with the black magic beliefs of the African slaves.

The black cat has long been associated with witches. Many superstitions have evolved about cats, and it was even believed that witches could change into cats. Some people also believed that cats were the spirits of the dead. One of the best known superstitions about black cats is when one crossed your path, you would have to turn around and go back because if you continued bad luck will strike.

Medieval folklore also described bats as connected to witches – and seeing a bat on Halloween was considered to be quite an ominous sign. One myth was that if a bat was spotted flying around one’s house three times, it meant that someone in that house would soon die. Another myth was that if a bat flew into your house on Halloween, it was a sign that your house was haunted because ghosts had let the bat in.

A common source of fear, spiders make for creepy, crawly Halloween staples. They join the ranks of bats and black cats in folklore as being evil companions of witches during medieval times. One superstition held that if a spider falls into a candle-lit lamp and is consumed by the flame, witches are nearby. 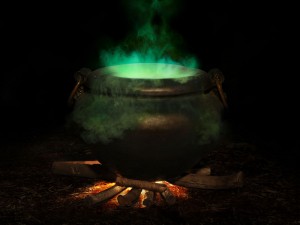 Still connected to witches, and to pagan Celts beliefs. They believed that after death, all souls went into the crone’s cauldron, which symbolized the Earth mother’s womb. There, the souls awaited reincarnation, as the goddess’ stirring allowed for new souls to enter the cauldron and old souls to be reborn. That image of the cauldron of life has now been replaced by the steaming, bubbling, ominous brew. 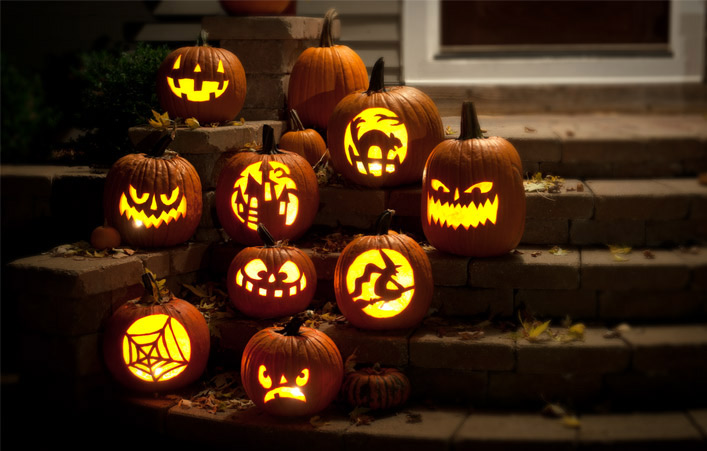 This is based on an old Irish legend about the drunk, Jack. One day he was out in the woods and tricked Satan into a tree to throw down some fruit. Once Satan had helped him, he carved a cross into the tree and trapped him there. He then struck a deal that Satan would leave his soul alone when he died. This backfired when he died since heaven would not take him either. When he kept bothering the Devil to let him in, the Devil gave him a burning ember instead. He carried the ember in a hollowed out turnip to light his way as he wandered through eternal darkness on Earth. Eventually, the turnip was replaced with the pumpkin in America and became the modern Jack-o-Lantern.

Candy apples are popular Halloween treats, and the sugary fruit on a stick was handed out since the early days of trick-or-treating in North America – they can be covered in caramel or chocolate with nuts, as well as in the classic, shiny red syrup.

The fusion of Celtic and Roman traditions is behind Halloween’s candy-apple staple. Samhain was around the time of the Roman festival honoring Pamona, the goddess of fruit trees. The goddess is often symbolized by an apple, so the fruit became synonymous with Samhain celebrations of the harvest. Since it was a symbol of celebrating harvest, apples were viewed as a sacred fruit. In ancient times, they were believed to predict the future. Bobbing for apples is one of the traditional games used for fortune-telling on Halloween night. It was believed that the first person to pluck an apple from the water-filled bucket without using their hands would be the first to marry. 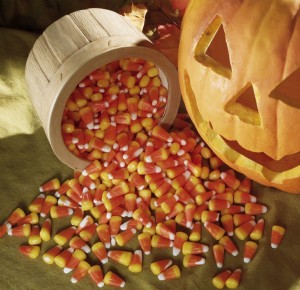 The candy most synonymous with Halloween, candy corn was invented in the late 1880s and has not much connection to olden times but may be considered as a modern take on the holiday already. The original process for making candy corn was cumbersome and time-consuming, as each color of syrup had to be heated up in large vats and carefully poured by hand into specially shaped molds. But the yellow, orange and white candy — meant to resemble a corn kernel — was a huge hit and remains a popular part of Halloween to this day.

In olden times, it was believed that visiting ghosts during Samhain could disguise themselves in human form, such as a beggar, and knock on your door asking for money or food. If you turned them away empty-handed, you risked receiving the wrath of the spirit and being cursed or haunted.

While millions of people celebrate Halloween without knowing its origins and myths, the history and facts of Halloween make the holiday more fascinating. And we’re now more excited to go trick-or-treating! There’s no bad luck on preparing early for this holiday, so why don’t you?