Sacagawea is the Shoshone Indian guide who appeared on the scene of history in 1804 to assist Lewis and Clark on their momentous expedition west, however that was not her last appearance.  In 2000 she was making history again, becoming immortalized on the Golden Dollar coin. 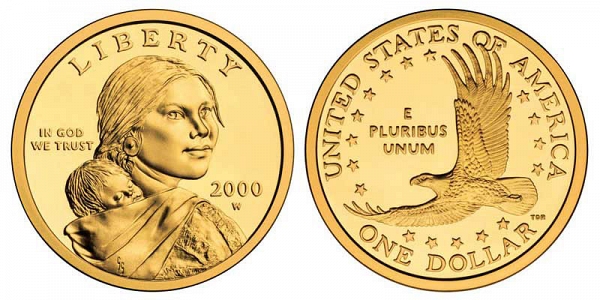 The coin’s obverse has Sacagawea portrayed in three-quarter profile and looks straight at the holder. Glenna Goodacre, the artist of the obverse, included the large, dark eyes attributed to Sacagawea in Shoshone legends; she used a present-day Shoshone college student, Randy’L He-dow Teton, as her model.

On her back, Sacagawea carries Jean Baptiste, her infant son. Six months pregnant when she joined the Lewis and Clark expedition — Sacagawea gave birth to Jean Baptiste early in the journey.

The selected reverse features a soaring eagle encircled by 17 stars representing each state in the Union at the time of the 1804 Lewis and Clark expedition.

The dollar coin features distinguishing traits including: a golden color, extra-wide border, smooth edge like the nickel’s, and specially designed alloy. Want to own one? View our Golden Dollar collection HERE.